Buckle up and batten down the hatches – we have some MAJOR news today. News that, frankly, we’ve been dying to share with you for months!

First off, we’re excited to announce a partnership with our good friends at Serenity Forge! While we were extremely happy with the success of the Kickstarter campaign, the one goal we fell short of that really didn’t sit right with us was being unable to bring the game to consoles. From day one, we didn’t want to limit the game solely to a PC release, as everybody deserves a chance to play Freakpocalypse on the platform of their choice.

Thanks to our partnership with our longtime friends at Serenity Forge, we’re going to be able to make that happen.

For starters, FREAKPOCALYPSE WILL RELEASE ON THE NINTENDO SWITCH! 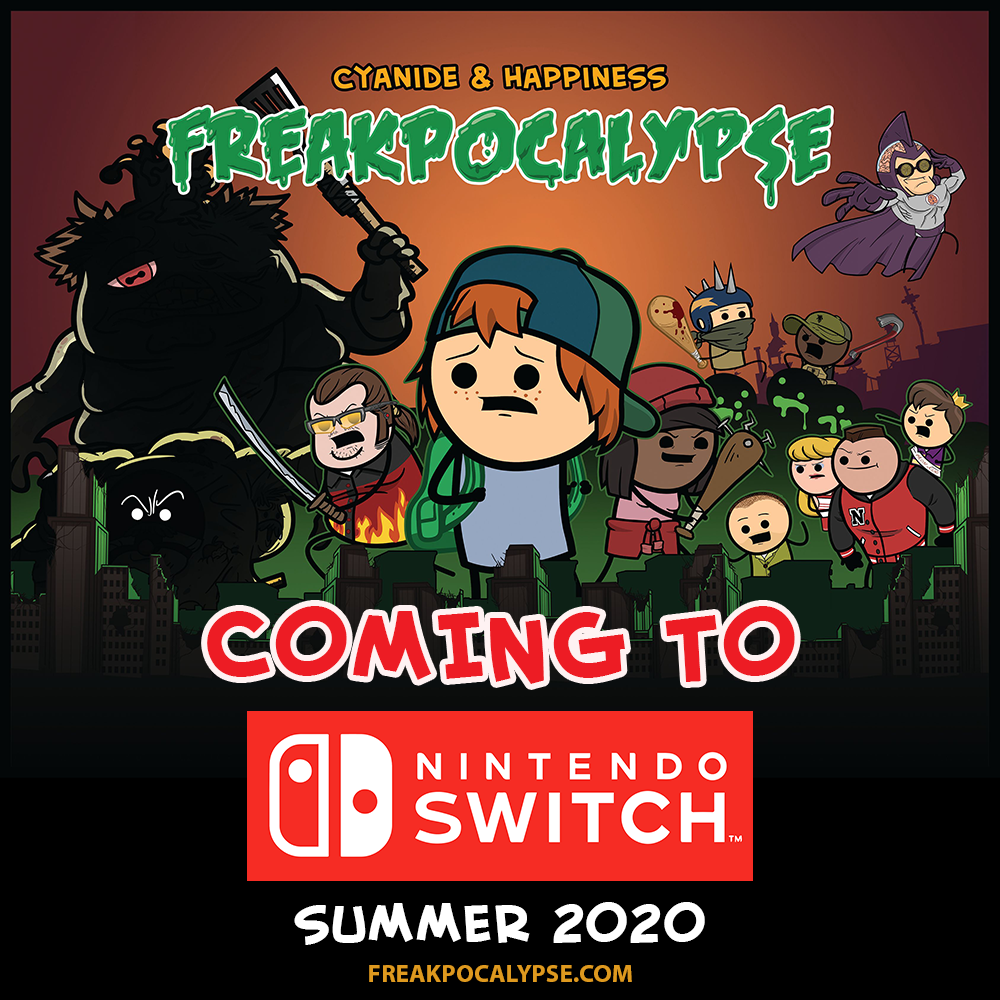 It will be exclusive on the Switch for a 1-month exclusivity period (alongside the planned release on Steam). We’re beyond stoked about this, as we always believed the Switch would be the perfect console to release our adventure game on. Click here for more info. Here’s an all-new announcement  trailer video from Nintendo for Freakpocalypse coming to Switch:

Additionally, the game was part of the Nintendo Indie World Showcase yesterday, and if you tune in below at the 5:40 mark, you'll see a special interview with Kris and his new friend:

For those of you who don’t have a Switch, fret not, because Freakpocalypse will also be coming to other platforms TBA. We didn’t wanna leave anybody out, so that’s why we’ve been taking the time to do this release right. And since we know some of you will be curious about “switching” your backer keys from the Steam version of the game to Switch, we’re currently looking into that and will have more info about it in a future update.

In regards to the PC / Mac / Linux versions of the game, I’m happy to announce that our “Coming Soon” Steam page for Part 1 of Freakpocalypse is now LIVE! Check it out and please Add it to your Wishlist to be notified the moment Freakpocalypse is released: 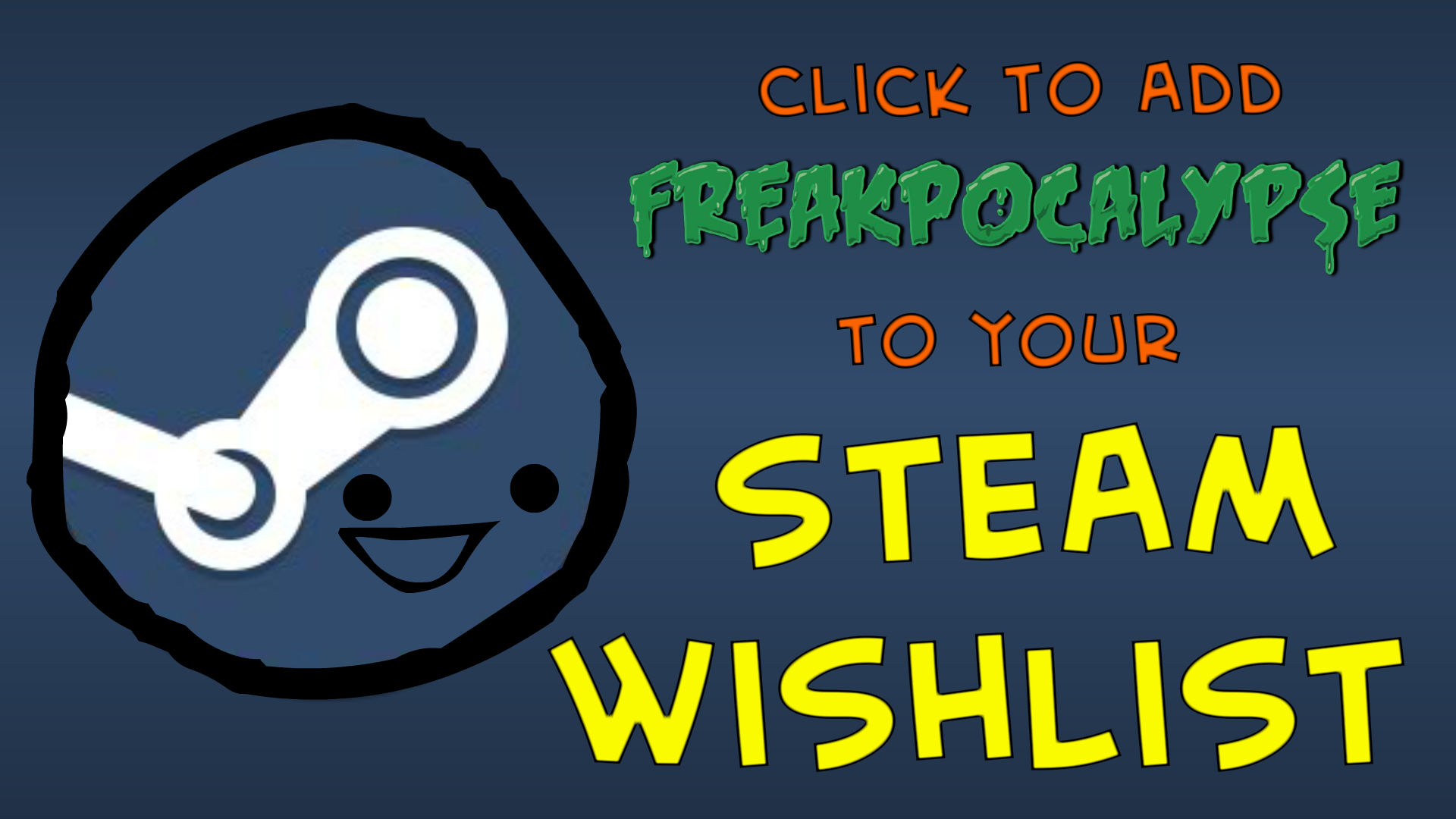 Feels so great to see it up on Steam after all this time. Abandonware schmabandonware... Freakpocalypse IS coming this summer!

That’s not all the news either! Freakpocalypse will now be localized in even MORE languages: English, French, Italian, German, Spanish, and Brazilian Portuguese. Plus, Serenity Forge is assisting us with further QA testing of the game to ensure that everything will be running smoothly come launch time.

As you can imagine, it was painful for us to keep a lid on all this amazing news for so long until everything was finalized, but we didn’t want to spill the beans early in case anything fell through. But now the beans have been spilled, and as you can see, they’re tasty, tasty beans! It’s an incredibly exciting time for the game, and we can’t wait to show what we have in store for you this year.

And now for a quick FAQ to clear up some questions you may have about all this news:

Q: Is this why Freakpocalypse hasn’t been released yet?

A: Bingo! We know you’ve all been wondering why the game has been delayed for a while, and now you have your answer. It just didn’t feel right to release the game on one platform, so we’re making sure everybody will have a chance to experience Freakpocalypse. We're also still working on the Steam version of the game including localization, finalizing cutscenes, and conducting extensive testing on it with the help of Serenity Forge. We understand people want to play the game as quickly as possible, but our #1 priority is making sure it's as bug-free and enjoyable as possible.

Q: But I thought you weren’t going to sell this game to a publisher?

A: We didn’t sell it to anybody, as we still own the rights to Freakpocalypse. We’re partnering with Serenity Forge to make the game even better and more widely available.

Q: Okay, but won’t they be telling you what content you can/can’t put in the game now?

A: Nope! We still have complete creative control of the story and everything that goes into the game. Serenity Forge doesn’t wanna step on our toes, they wanna give us extra toes!

Q: So, what is Serenity Forge doing exactly?

A: Quite a lot, but the biggest thing they’re doing is taking care of the porting of the game to other platforms while we continue to work on the ongoing Freakpocalypse story and game development. They also have experience localizing to different languages and have been helping us expedite that process along with adding additional languages.

Q: What platforms will the game be released on and when is the release date?

A: Initially, it will be on Steam and the Nintendo Switch. Other platforms are TBA. As for the release date, we’ll be making those announcements in the near future, but you can expect to see chapter 1 released in Summer 2020.

Q: When Freakpocalypse is released, can I have my key for the PC/Mac version of the game switched to a console version instead?

A: We can't guarantee that we have the ability to do that, but we’re currently looking into the logistics regardless. We'll have more info about it in a future update.

Let us know what you think in the comments below, and if the above FAQ didn’t answer all of your questions, feel free to ask.

So there you have it. Hope you’re as excited about all this news as we are, and don’t forget to Add Freakpocalypse to your Wishlist. Freakpocalypse is moving full steam (and switch) ahead in Summer 2020!

Did you know by creating an account you can favorite comics, shorts, minis, podcasts, automatically bookmark the last one you saw, and more? Learn more about it here!

We get it, ads suck, but ads allow us to keep making comics and shorts for you.

If you'd rather not watch ads, would you at least sign up for our monthly newsletter so you never miss when we announce cool stuff ?